Arthur Rackham was born in Lewisham on 19th September 1867 and, after being educated at the City of London School, studied art at Lambeth School of Art where he was influenced by his fellow student, Charles Ricketts. He joined the staff of The Westminster Budget in 1892 and from that time concentrated on the illustration of books and particularly those of a mystical or legendary background.

He assimilated a wide variety of influences, including the work of E J Sullivan and the Victorian fairy painters, and by the turn of the century he had evolved his characteristic style and was soon established as one of the foremost Edwardian illustrators. Rackham’s first publications included, The Ingoldsby Legends (1898) and Lamb’s Tales from Shakespeare (1899); and with Rip Van Winkle (1905), Peter Pan in Kensington Gardens (1906) and A Midsummer Night’s Dream (1908) his reputation was assured. In 1909 alone, he produced memorable illustrations to Undine, Fairy Tales of the Brothers Grimm, Gulliver’s Travels and a further edition of Tales from Shakespeare. An ardent follower of Wagner, he attended the Bayreuth Festival in 1897, 1899 and 1911, and his masterly interpretation of Wagner’s Ring of the Nibelung appeared in two volumes in 1910-11.

He exhibited widely at home and abroad, including several solo shows at the Leicester Galleries. Rackham won many awards. He was elected an associate member of the Royal Society of Painters in Water-Colour in 1902, a full member in 1908, and Vice-President in 1910. He was also Master of the Art Workers Guild in 1919, and a member of the Langham Sketching Club.

After 1920, Rackham undertook painting in oils and began to show at the Royal Society of Portrait Painters. He also experimented with some stage designing. 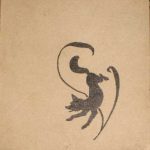 The drawing is identified on the back as a design for the Haddon Hall Library series which was launched by J. M. Dent in 1899. Reference: James Hamilton. Arthur Rackham: a Life with illustration (1990) which illustrates a number of these silhouette drawings which were used by Rackham for head and tailpieces and small text illustrations in magazines.