Sir Lionel Lindsay (1874-1961) is considered to be one of Australia’s most important printmakers, a master of various printmaking techniques and the creator of hundreds of images. His work enjoyed immense popularity in his own day and has remained highly sought-after by collectors.

In the 1890s, while studying at the Melbourne Art School, Lindsay saw and admired the etchings and engravings of the European and English masters – Rembrandt, Durer, Whistler and Meryon – in the collection of the Melbourne Gallery, but assumed that the process of etching was beyond the reach of anyone in Australia. Not long afterwards, however, a print by John Shirlow, the first Australian-born etcher to achieve any distinction, was exhibited in Melbourne, and Lindsay immediately became convinced that he, too, could be an etcher. Guided by instructions in P.G. Hammerton’s book “Etching and Etchers”, he explored the mysteries of the art, using a second-hand knife polishing machine as a press and some copper-plate from a junk yard.

The two decades after 1907 saw him active with the Society of Artists and in 1921, when the Australian Painter-Etchers’ Society was formed, Lindsay was its first president. In 1923, he began to exhibit in London and had his most successful exhibition of that period at Colnaghi in 1927, which further cemented his artistic reputation. Colnaghi, a London art dealer, led British interest in Lindsay’s work and guaranteed his reputation as a major British printmaker.

Trustee of the Art Gallery of NSW, art historian and recipient in 1929 of the Society of Artists medal, Lindsay was knighted in 1941 for his services to Australian art. His work is represented in Australian state galleries, regional galleries and overseas in the print collection of the British Museum, the New York Public Library, and many other major institutions. 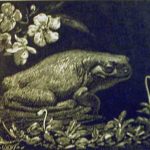