In the post First War years the art of Raoul Dufy mellowed from the expressive intensity of his Fauve period into a marvellous and lyrical expression of the freedom and joy of life itself expressed through symbols such as the sea, sailing and the enjoyment of the open-air. These compositions are typical of his work from this period. A selection of three beautiful original lithographs by Raoul Dufy. These were the last prints made before he died in 1953. They were printed by Mme Daragnes, the wife of artist and master printer Jean-Gabriel Daragnes and a Paris friend of Dufy in a retrospective of his life’s work titled Illuminations Nouvelles. The prints were issued in an unsigned edition of 250. An additional suite was pulled from the stone on Japon paper in a smaller edition of 20. 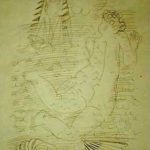 Edition of 50 on Japon paper.