Maurice Utrillo was one of the few painters of Montmartre to have been born there. The son of a local model and an amateur painter, Utrillo was born into the world of Toulouse-Lautrec, Renoir, and Degas, for the most part absorbing the work of those around him without formal study.

He began painting the sights around him, and started to be taken seriously by his contemporary artists, who saw in his work a new way of representing Paris, despite his interest in the impressionism of Sisley and Pisarro, and a strangeness that was determinedly modern. He placed a great emphasis on texture, sometimes incorporating sand, plaster, or lime into his paint, and became a master of the subtle, reductive palette. Critical acclaim followed, with his international reputation being firmly established by the 1920s; he was awarded the Legion of Honor in 1929. He produced painted scenery and designed costumes for Diaghilev, his style lending itself well to the stage. His work is held in major collections throughout the world.

Daniel Jacomet and the pochoir process

The modern French tradition in the art of printmaking is represented in the prestigious work of Daniel Jacomet who worked to produce beautiful pochoir prints in collaboration with Modern Masters such as Picasso, Braque, Foujita, Klee, Matisse, Renoir, Gris, and numerous others. The Atelier Jacomet was founded in 1910 by Daniel Jacomet, and today is in the hands of his grandsons. It specialises in stencil (pochoir), the oldest technique of multicolour reproduction.

The Pochoir is a technique making use of templates. It was popular at the beginning of the twentieth century, for instance in Art Deco. To arrive at subtle shades of colour, an ingenious but time-consuming and very complicated method was later invented by Jacomet, which produced stunning results.

The pochoir process, characterized by its crisp lines and brilliant colours, produces images that have a freshly printed or wet appearance.

Pochoir begins with the analysis of the composition, including colour tones and densities, of a colour image. Numerous stencils were designed as a means of reproducing an image. A craftsman known as a découpeur would cut stencils with a straight-edged knife. The stencils were originally made of aluminium, copper, or zinc but eventually the material of choice was either celluloid or plastic. Along with this transition of stencil materials, there was a shift away from the use of watercolour towards the broad, soft, opaque layers of gouache. The technique was further refined in an effort to create the most vivid, accurately coloured reproductions. Stencils created by the découpeur would be passed on to the coloristes. The coloristes applied the pigments using a variety of different brushes and methods of paint application to create the finished pochoir print.

The manual aspect of pochoir has been both one of its most valuable attributes and one of its greatest failures as a medium. Pochoir is both labour-and time-intensive, making it an expensive and slow process of printmaking. As a result, techniques such as lithography and serigraphy, mechanized in nature, have replaced pochoir as a method of reproduction. Pochoir has been used in conjunction with other medium such as engraving, lithography, or photography as a means of adding colour to a print. 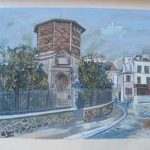 signed and dated in the plate

produced in Paris by Daniel Jacomet