The work of Lucien Pissarro is a consummation reached by the unity of artistically fitting method with a sense of design inherently adaptable to the material of expression… He obtains a decorative effect most harmoniously and artistically spaced and balanced and expressed with a line firm and sensitive, without harshness and crudity but with no lack of definitiveness. Sympathetic and plastic, the line is never soft nor accidental; it has all the peculiar quality imparted to it by the wood itself.
J.B. Manson, The Imprint, 1913.

Lucien Pissarro was the son of one of the founding fathers of Impressionism, Camille Pissarro. Lucien came to England in 1890 after fleeing the German invasion in France. He began experimenting with wood engraving, and was introduced to Charles Ricketts and Charles Shannon, who published his first portfolio of engravings in 1891. From 1894 he began to issue books with wood engravings setting up the Eragny Press. During his life he cut some 350 blocks, a number were destroyed in a fire but the Ashmoleon Museum retains the largest collection of them. These charming examples of Pissarro’s engravings were printed from the original blocks using an Albion hand-press by Iain Bain and David Chambers, similar to that used by Pissarro. The engravings are printed on hand-made Japanese Hosho paper in an edition of 175 and are available within mounts. 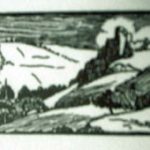 Printed by David Chambers and Iain Bain from the original block in the Ashmoleon Museum, Oxford, 1981