Louis Marcoussis was born Lodwicz Markus in Warsaw, Poland. His father was a wealthy carpet dealer and after a good education in Warsaw and Cracow was allowed to go to Paris in 1903. In 1910, after visiting Spain, he met Braque, Picasso and the poet Apollinaire and soon became a member of their circle. He became one of Guillaume Apollinaire’s greatest friends, indeed it was he who dubbed him ‘Marcoussis’ and was closely involved with the Surrealists in Paris, Apollinaire, André Bréton and Paul Eluard.

In Paris, Marcoussis worked as a cartoonist for L’Assiette au Beurre, the satirical journal and other periodicals. Another friend, the poet and artist Max Jacob introduced him to Gertrude Stein and Alice B Toklas. He tried painting in various styles but was eventually converted to cubism and became one of its leading figures. His cubist prints in particular were much admired and his etchings and illustrations for numerous books were the inspiration for other cubists, such as his friend Juan Gris. He exhibited in Berlin with great success, inspiring many young German artists. 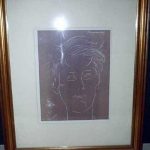 Original engraving, printed in purple ink, signed in the plate

This is a very fine impression on cream wove paper, showing a portrait of the poet Arthur Rimbaud printed in purple. The first two states of this print did not show the flies — a recurrent lietmotif in Rimbaud’s works — which were added for the third state. This fourth state was reworked by Marcoussis for publication in the February/March issue of the journal XXe siècle (nos 5-6), with the addition of his signature in the upper right hand corner. This was the second portrait of the young French symbolist poet, Rimbaud, executed by Louis Marcoussis.