Herbert Ogden Waters was born in Shantou, China on November 15, 1903, the son of Baptist missionaries. He attended high school in Shanghai and then came to America where he graduated from Denison University in 1926. His post-graduate work includes study at the Pennsylvania Museum School of Industrial Art, the Art Institute of Chicago, and Harvard University. He received honorary doctorates in fine arts from Plymouth State College (1984) and Alderson-Broaddus College (1985). In 1932 he married Bertha Adams, a childhood friend from China.

Since 1933, except for a brief period of war service in a Providence shipyard, Herbert and Bertha Waters made their home in New Hampshire. Waters lived in Warner, NH as an artist and art teacher from 1936 to 1941 in the Works Progress Administration’s Federal Art Project. Later, he taught at the University of New Hampshire in Durham, at Holderness School in Plymouth, and at Alderson-Broaddus College in Phillipi, West Virginia.

Throughout a long career, Waters continued to refine his printmaking techniques, especially in wood engraving, and to explore the intimate and grand landscapes of New Hampshire from his home in Campton, NH. He completed his last engravings from 1992 to 1993. Various museums, including the Boston Museum of Fine Arts and the Metropolitan Museum of Art, the State of New Hampshire’s Living Treasures Collection, as well as numerous private collectors, own examples of his work. The New Hampshire State Council on the Arts has collected some of his more recent prints. 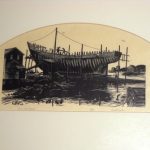 signed, titled and inscribed ed/95 by the artist in pencil

Provenance: with letters from the artist included on reverse