Spanish painter. Francisco Borès began his training in Madrid in the studio of the painter Cecilio Plá (1860-1934) and as a copyist in the Museo del Prado; among the works he copied were paintings by Titian, Velázquez and Goya. In Madrid he became associated with intellectuals involved with the avant-garde and produced illustrations for journals such as España, Alfar, Revista de Occidente and Cruz y Raya. In 1925, after taking part in the important Exposición de artistas Ibéricos in Madrid, he settled in the Montparnasse district of Paris, where he became associated with Picasso, Gris and other Spanish artists and also became friends with Derain and Matisse. 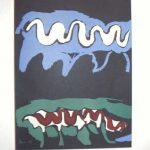 signed and dated ’37 in the stone

the full sheet with printed to the edges in fine condition.