French painter, draughtsman, illustrator, printmaker, stage designer, film maker and ceramicist. Among the most prominent artists in Paris in the first half of the 20th century, he was prolific in many media and articulated a consistent position on the role of art in society in his many lectures and writings. His mature work underwent many changes, from a Cubist-derived abstraction in the 1910s to a distinctive realist imagery in the 1950s. Fernand Léger attracted numerous students to his various schools, and his ideas and philosophy were disseminated by modern artists throughout Europe and the Americas. 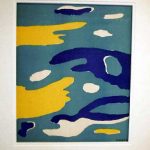 Signed and dated’37 in the stone