Charles Menge was born in Granges, Switzerland in 1920. He studied at the école des Arts Industriels in Geneva under Adrien Bovy. He then went on to work in Graphic art in Geneva and retunred to Sion in 1955. His work was exhibited in Switzerland and in Amsterdam and France. He experimented with a variety of media during his lifetime but remained predominantly a painter. He executed a number of frescoes for a church in Mâche and for the sanatorium in Montana and the Museum of Wine in Salquenen. He also illustrated a number of books. Works by Menge are held in both public and private collections from Paris to New York. 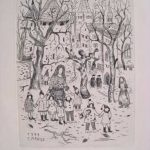 signed and dated 1974 in the plate

aside from edition of 50