An icon of twentieth-century pop art, Andy Warhol began work on the famous portraits of Marilyn Monroe in 1962. He used the medium of silkscreen printing (where fabric is stretched over a frame to hold stencil designs and carry ink onto the paper) to produce iconic portraits, often with repeated imagery of celebrities such as Elvis Presley, Liz Taylor or Marilyn Monroe herself. These silk screens were produced circa 1970 by Warhol’s studio, the Factory in New York, who took the screens to Belgium and printed more from them, extending the earlier edition that was signed by Warhol and limited to only 250 prints. These slightly later silk screens are stamped on the verso “Sunday B. Morning” and “Add your own signature here”. This series of prints was produced in ten colour schemes.

The celebrated critic Robert Hughes writes on Warhol’s fascination with serial images, which he repeats throughout his work like a mantra invoking the commodification of life and love, politics and religion.

‘It all flowed from one central insight: that in a culture glutted with information, where most people experience most things at second or third hand through TV and print, through images that become banal and disassociated by being repeated again and again and again, there is a role for affectless art. You no longer need to be hot and full of feeling. You can be supercool, like a slightly frosted mirror…. . Warhol extended it by using silk screen, and not bothering to clean up the imperfections of the print: those slips of the screen, uneven inkings of the roller, and general graininess. What they suggested was not the humanizing touch of the hand but the pervasiveness of routine error and of entropy…’ (Robert Hughes, American Visions.) 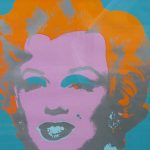