French painter and etcher. André Dunoyer de Segonzac was born at Boussy-Saint-Antoine (Seine-et-Oise) and began to study art in 1900 at the Académie de la Grande Chaumière and the Académie Colarossi, then in 1901 in the studio of L.-O. Merson, while also attending the Ecole des Langues Orientales. He was engaged in military service from 1902-1903

He was well-known for his landscapes, still life and nudes. His first one-man exhibition was held at the Galerie Levèque, Paris, 1914. From 1919-20 he made a large number of etchings and watercolours. His etchings include illustrations to the Georgics, Colette’s La Treille Muscate, the poems of Ronsard and various other books. He was awarded First Prize at the 1933 Pittsburgh International and the main prize for painting at the 1934 Venice Biennale.

Dunoyer de Segonzac’s work is held in all the major museums of the world, including the Tate Gallery, London. 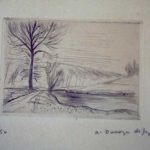 Printed by Vernant in Paris

signed and numbered 14/50 by the artist

Provenance: from the collection of the painter and writer Roger Fry, with a note to the reverse ‘Segonzac Paysage from S. M. Fry, a memory of Roger Fry to who it belonged, Xmas, 1936.’