Anders Zorn was one of the leading European artists around 1900. He was a contemporary of Munch and Max Liebermann. His interest was above all concentrated in the French tradition of capturing realism. Zorn was the son of a brewer and when still a child showed great artistic talent. In 1875 he was sent to study at the Academy in Stockholm where he began by learning sculpture. He showed a talent for watercolour painting and after leaving the Academy in 1884 travelled, first to Spain and later to London where he stayed until 1884, exhibiting at the Royal Academy and at the Royal Institute of Painters in Water-colour. In 1885 he returned to Stockholm although for the next few years he travelled extensively in the near East, North Africa and Europe. He settled in Paris in 1888 where worked as both painter and sculptor, becoming friends with Rodin and other of his contemporaries there. Although famed as a painter of portraits his best work was in the depiction of the female nude in both paint and notably, etching. His etching technique was prodigious and as here he was able to capture striking and almost lifelike poses with his characteristically rapid technique. 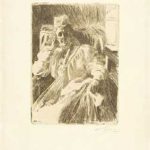 Etching executed on laid paper, signed in pencil below the platemark