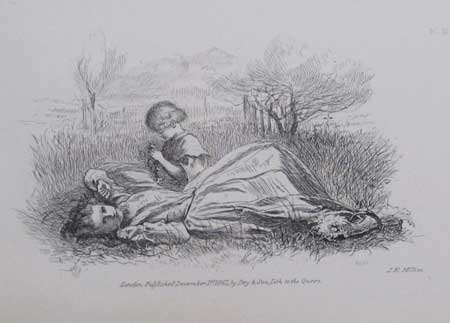 Signed with the monogram and dated in the plate.

First issue published by Day for the standard paper edition of Passages from Modern English Poets by the Junior Etching Club, 1862, with the publication line and plate number (third of four states.)

The etching was first published by Day in a standard- and large-paper format in 1862 and was re-published in lithographic reproduction some fourteen years later by Tegg in 1876.

Millais joined the junior etching club in 1858 (a more youthful version of The Etching club with John Tenniel, Simeon Solomon and Arthur Severin as members.) The group produced Passages from Modern Engish Poets in 1862.

‘Passages was successful enough to be issued later in a large paper edition in 1876, published by Willaim Tegg, when the plates were transferred to stone and printed as lithographs. Here appeared one of Millais’s most striking prints, Summer Indolence, an exercise in idleness in which a young girl lies in the long meadow grass with a child, a blade of grass pulled between her teeth. The mountainous landscape with low trees is again merely suggested, but the grass is deeply bitten in the plate to indicate lushness.’ (Engen, pp. 33-34.)