Etchings in remarkable condition by the artist and engraver, Robert Walker Macbeth. Macbeth was the son of the Scottish portrait painter Norman Macbeth. He served on the Council of the Royal Society of Painter-Etchers. Macbeth was a member of both the Royal Academy and the Royal Watercolour Society, a highly-regarded artist in his own right and also an accomplished printmaker, whose interpretations of works by other Victorian artists enjoyed a high status critically. Macbeth studied at the RSA and came to London in 1871. He entered the Royal Academy Schools and began exhibiting there from 1870. He was highly skilled as an artist-printmaker and etched numerous plates after the work of Burne Jones, Velasquez, Titian, Frederick Walker and George Mason. Macbeth was perhaps best-known for his etchings after the popular genre painter, Frederick Walker.

Both Fredrick Walker and George Pinwell were part of The Idyllists, a group of younger social-realist painters, who worked from life and often out-of-doors depicting rural life. Robert Walker Macbeth did much to publicise their work by producting engravings of many of their paintings. “They are remarkable for the vigour and richness with which they suggest the colour and handling of their originals.” (DNB.) 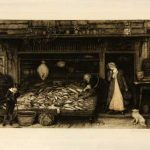 Signed by the engraver in pencil

Condition: pristine condition. An example of the etching was exhibited at the Royal Academy in 1887.

An example of this etching is held in The Victoria and Albert Museum. 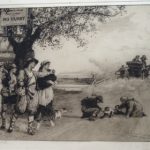 etching on Japon paper with margins

Signed by the engraver in pencil & additionally initialled in the plate 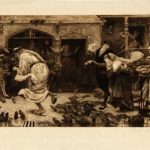 Signed by the engraver in pencil

An example of the etching was exhibited at the Royal Academy in 1884 and 1885.