Born in London, David Gentleman studied at St Albans School of Art from 1947 and subsequently at the Royal College of Art, London, from 1951 to 1953, under John Nash where he also taught from 1953 to 1955. He was elected to the Faculty of Royal Designers for Industry in 1972 and received an honorary doctorate from Kingston University in 1993.

Gentleman is also a well-known book illustrator and stamp and poster designer (commissions have included the Royal Mail, The National Trust and the London Underground. He designed the dust-jackets for many of Laurence Durrell’s novels and has produced many fine book illustrations. He has illustrated more than fifty books and also written books for children. His books about England are immensely popular (Bridges on the Backs, 1961; David Gentleman’s Britain, 1982; David Gentleman’s London, 1985; Westminster Abbey, 1987 and David Gentleman’s Coastline, 1988). 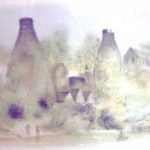 Printed by the Curwen Studios

signed and numbered 184/240 by the artist in pencil 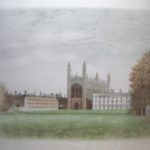 signed and numbered 165/200 by the artist in pencil