Charles Hazelwoord Shannon was born in Sleaford Lincolnshire. He studied wood engraving at the Lambeth School of Art where he met his lifelong friend Charles Ricketts. Together with Sturge Moore, the three formed the Vale Press (1894-1904) which produced forty-eight books notable for their fine design and quality. Rickett’s and Shannon moved into Whistler’s House in the Vale, Chelsea. Oscar Wilde said of the place, ‘A house where you will never be bored.’ Shannon and Ricketts produced a number of engravings for Wilde’s books, including The House of Pomegranates (1891). Both Ricketts and Shannon were highly literary in outlook, sharing a common aestheticism. They established a fine collection of Japanese prints and had a love of eighteenth-century France. Their Oriental Collection was left to the British Museum and their drawings and other objects to the Fitzwilliam Museum, Cambridge. Shannon was a member of the Society of Twelve and was elected ARA in 1911 and RA in 1921. The British Museum, and Victoria and Albert Museum hold examples of his work.

A hauntingly beautiful series of superb lithographs by Charles Shannon RA. One with the provenance of American businessman F. E. Bliss (who was the father of the composer Sir Arthur Bliss). A provenance shared with lithographs by Shannon in the Fitzwilliam Collection. Indeed Ricketts wrote the preface to the catalogue of Bliss’ collection. 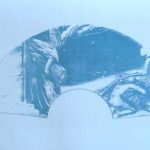 One of the strengths of Charles Shannon’s work was his sense of design, which led him to experiment with unusual shapes, including circular and fan-shaped lithographs. He designed and printed seven lithographic fans between 1906 and 1909, enjoying the compositional challenge they presented.