Nick Park, CBE is an English Filmaker of stop animation best known as the creator of Wallace and Gromit and Shaun the Sheep.

Park has been nominated for an Academy Award six times, and won four with with his animated films. 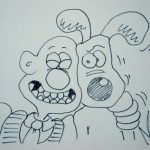 An original drawing in black ink of Wallace and Gromit by Oscar-winning creator Nick Park.