The artist was born in Somerset, and studied at Taunton and Chelsea Polytechnic. In WWI he was the Canadian Government war artist and in 1925 was commissioned to promote rail and hotel facilities through poster art in western Canada, by the Canadian Pacific Railway. His large colourful posters adveritising the region and the Canadian Rockies were much admired, and he worked for the English railways as well.

He is one of the many artists who began work in West Cornwall at an earlier date, moved away and then returned to Cornwall at a later date, in his case, for three years from 1946 to 49. 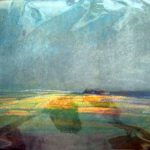 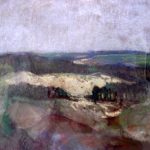