John Wells was born in London. He lived in Ditchling, Sussex until 1921 and studied medicine at University College Hospital, London in the 1920s and 30s. Though his only formal artistic training was from night classes at St Martin’s School of Art during the 1920s, he exhibited in the ‘Daily Express’ Young Artists Exhibition at the Royal Society of British Artists in 1927. During a visit to Cornwall in 1928 he studied briefly with Stanhope Forbes in Nerwlyn and was introduced to Ben and Winifred Nicholson and Christopher Wood. He was in contact with Nicholson throughout the 1930s, though work prevented him from making more than the occasional visit to his Hampstead studio. He qualified as a doctor in 1930 and, after working in a number of hospitals, became the GP for the Scilly Isles from 1936 to 1945. During the war he was able to make occasional visits to Nicholson and Hepworth in St Ives where he also met Naum Gabo, who became a major and lasting influence upon him. At the end of the war, with a new confidence in his recent work, he chose to pursue a career as a full-time artist, buying one of Forbes’s former studios in Newlyn.

Though living in Newlyn, Wells was at the centre of artistic activity in post-war St Ives. He was a founder member of the Crypt Group in 1946 and of the Penwith Society of Arts in Cornwall in 1949. He shared an exhibition with Winifred Nicholson at the Lefevre Gallery, London, in 1946. In 1965 Wells acquired a second studio in Newlyn which he shared for nearly thirty years with the sculptor Denis Mitchell. The Tate Gallery’s 1985 exhibition St Ives: 25 Years of Painting, Sculpture and Pottery included seven works by Wells.

Examples of his work are held in the Tate Gallery, The Victoria and Albert Museum, Gothenburg Museum and Piers Art Centre. 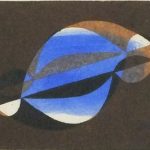 signed and inscribed to the reverse by the artist