Jim Davis is the American cartoonist known for his feline comic creation Garfield.

During the late 60’s and early 70’s, Davis assisted with and created various comics including Tumbleweeds and Gnorm Gnat, however he achieved vastly greater success with his Garfield strip. Garfield holds the Guinness World Record for being the world’s most widely syndicated comic strip. 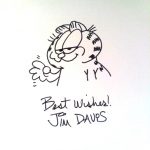 signed and inscribed ‘Best wishes’ by the artist