Amélie Delacoste was part of the Swiss Delacoste family. Her Father Henri settled in Algeria where Amelie became part of the Oran school in French Algeria. She exhibited widely there and was part of the “Quinzaine oranaise”, founded in 1932. Her work was exhibited Musée Demaeght in Oran. Examples of her work were included in the 2003 exhibition in Bordeaux ‘l’Ecole d’Alger 1870-1962. Collection du Musée National des Beaux-Arts d’Alger.’ 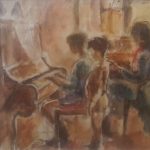